Manufacturing jobs are available in CT, but young people need to fill them

When Jill Mayer graduated from high school in 1999, career options felt more limited than what she sees available to today’s 18-year-olds. There was a “stigma,” Mayer said, “that if you don’t get a college degree you’re not going to be able to make good money and have a long career.”

But she likes to think that’s changing. Mayer, 40, now runs her family’s Milford-based manufacturing business, Bead Industries, and she recently took the helm as president of industry group ManufactureCT. In both roles, she puts a lot of energy into cultivating the manufacturing sector’s next generation of workers and leaders.

“Kids today are smartening up, saying, ‘Look, I don’t have to go to college to be super successful,’” Mayer said. “I wouldn’t say we’re all the way there, there’s a long way to go on that, but at least there’s awareness behind it.”

Building that “awareness” among young people is vital for the future of Connecticut manufacturing.

After a half-century of decline in the sector, local, state and federal lawmakers are working to revive Connecticut’s industrial base. But without a next-generation workforce to feed those green shoots, they could dry up.

Tens of millions of dollars in state and federal funding, much of it matched by private sector contributions, have gone into an array of education and training programs to funnel Connecticut workers into manufacturing jobs. It seems like at least once a week, a state or federal official is touting a new effort to bring industry back to Connecticut.

Indeed, many sectors are facing labor shortages as the economy heats up in the aftermath of the pandemic recession. But policymakers have homed in on manufacturing because increased factory production often leads to “multiplier effects” — that is, increased activity in related sectors, like the companies that source materials or provide services to the manufacturing business. If Connecticut helps boost the workforce at Groton-based submarine manufacturer Electric Boat, for example, that has the potential to drive up business for all of the company’s local suppliers.

Since 2014, the state’s Manufacturing Innovation Fund has supported a range of programs from career activities for K-12 students to “pre-apprenticeships” and funding for tuition, books and transportation for high school students taking college-level courses in manufacturing. The state supports training programs in technical and comprehensive high schools, colleges and universities, the correctional system and online. The city of Hartford recently announced the creation of two “walk-in Community Manufacturing Training Centers.” And a portion of federal funds under the American Rescue Plan is slated for a new short-term job-training program dubbed CareerConneCT — modeled after one of Connecticut’s most successful training programs, the Eastern Connecticut Workforce Investment Board’s “Manufacturing Pipeline,” which offers tuition-free technical instruction for people seeking jobs at Electric Boat and other advanced manufacturing companies in the region. 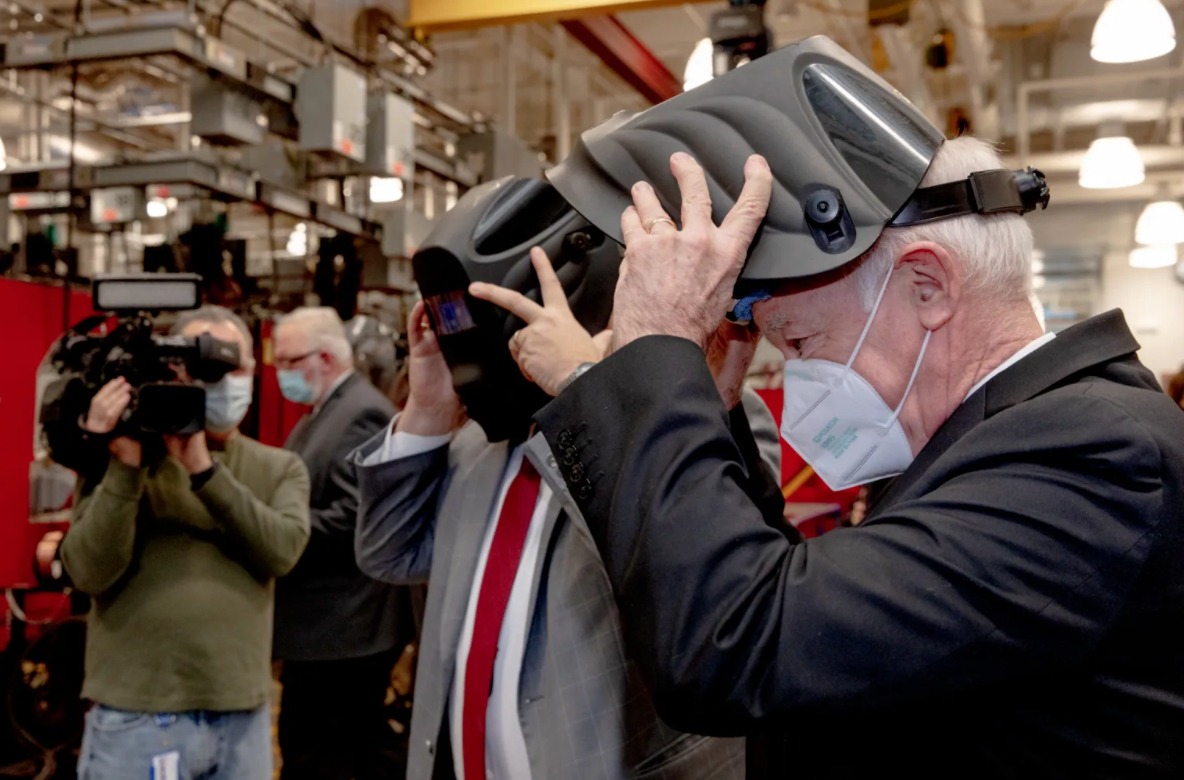 Still, businesses and state leaders acknowledge challenges in getting the word out. Late last year, the fund’s board approved plans for an advertising campaign to “drive up awareness, interest and enrollment and contribute to a stronger workforce talent pipeline in the future.” (An earlier 2017 marketing campaign, called the Connecticut Advanced Manufacturing Initiative, was seen as having been somewhat successful.)

The state has a long way to go. In late 2020, the Governor’s Workforce Council estimated that Connecticut’s current manufacturing training programs could produce about 3,000 new employees a year at best. That’s half of the projected annual demand for the next several years.

“Lack of awareness among young people regarding the attractiveness of manufacturing careers continues to constrain the number of people participating in education and training programs,” the council’s manufacturing committee found.

Manufacturing enjoyed a positive reputation for much of the mid-20th century, but by the late 1990s and early 2000s, that was shifting. Union membership had declined, and young people were increasingly turned off by what they perceived as dirty, dangerous and grueling careers in a field with few opportunities for growth. And many comprehensive high schools eliminated technical skills instruction.

At the same time, the information technology sector was booming, and supply chains were going global. Some U.S. factory production shifted to making high-tech products. Other operations brought in new machines and automation that boosted productivity. And many companies relocated their manufacturing facilities to parts of the world with lower labor costs. The combined factors led to a massive drop-off in America’s manufacturing workforce.

Connecticut was no stranger to that downward trend. In the 1950s, half of all jobs in the state were in the manufacturing sector (while nationally the figure stood at 34%). Connecticut’s manufacturing workforce peaked in 1967 at nearly 480,000 jobs.

Today, fewer than 160,000 people work in manufacturing in Connecticut, accounting for less than 10% of the workforce. That’s slightly higher than the national figure of 8.4%.

That generation-wide shock to the manufacturing business left physical shadows across Connecticut in the form of vacant factory properties, often situated prominently along the riverbanks, in dozens of the state’s towns and cities. Gen Z came of age amid the looming husks of the industry’s past — looking on as many were repurposed into upscale residential and retail spaces.

Colin Cooper, the state’s chief manufacturing officer and chairman of the Manufacturing Innovation Fund’s advisory board, grew up in New Britain when it was known as the “Hardware Capital of the World.” Several manufacturers occupied the “very large monolithic brick buildings” downtown, Cooper recalled. It was so bustling, he said, “you didn’t want to be caught there at shift change.”

By contrast, today’s factory operations “tend to be smaller and specialized, and they’re predominantly located in light industrial parks out in the suburbs at the end of some cul-de-sac,” Cooper said. “It’s not front-of-mind as much as it was.”

And many current K-12 students don’t personally know adults who work in the field. With a much smaller cohort among Generation X and Millennials, Connecticut’s manufacturing workforce skews older. More than one-third of the industry’s workers are over age 55, compared to around 27% across all sectors, according to the state labor department.

Abigail Nadeau, a high school senior studying mechanical design and engineering at Ella T. Grasso Tech in Groton, said she wasn’t very familiar with the manufacturing field before she started exploring the program at school.

“I only found out after I had gone into mechanical design that my grandfather was also in mechanical design,” she said. “I didn’t know that when I joined.” When Nadeau learned she was following in her grandfather’s footsteps, she said her reaction was: “Oh, wow!” 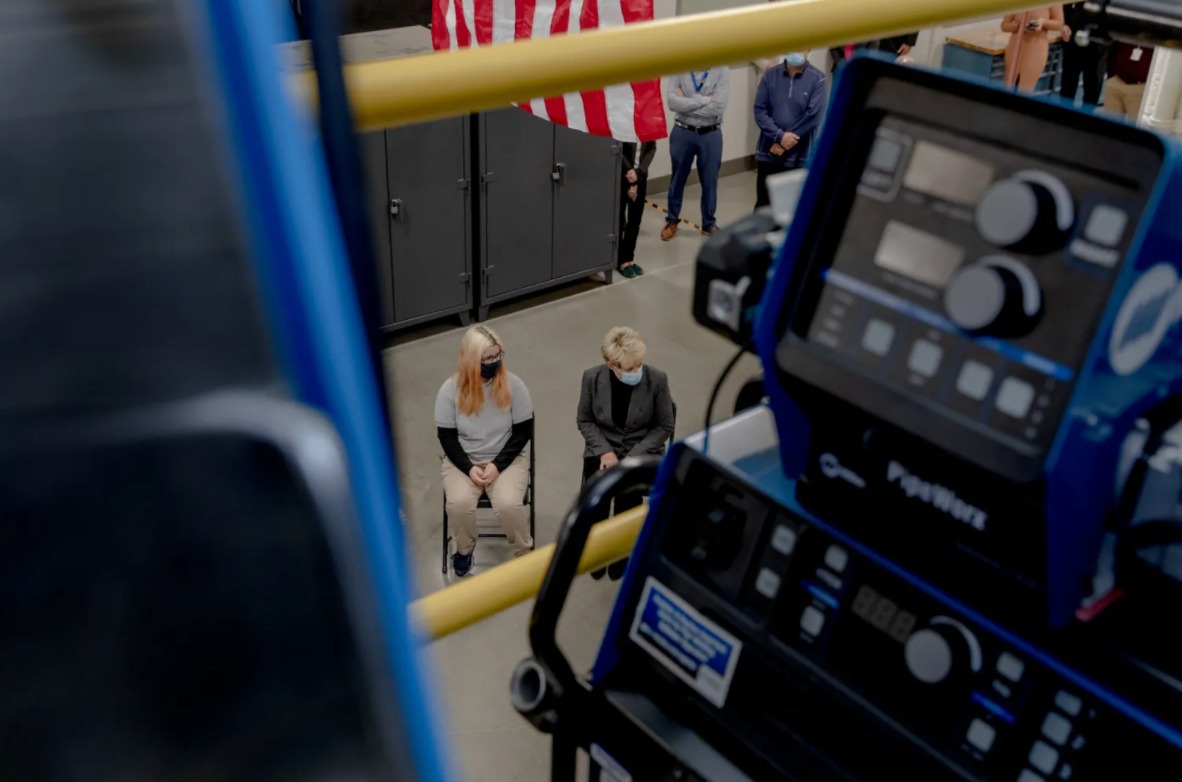 Last summer, Nadeau interned at Electric Boat, and she hopes to work there after graduation. She was among a handful of Grasso Tech students who met with U.S. Education Secretary Miguel Cardona when he visited the school earlier this month. During a roundtable conversation, Cardona asked Nadeau if she thought she’d have a hard time finding a job this spring.

“No,” she responded. “EB is pretty much always hiring.”

The submarine manufacturer is one place where the need for skilled labor appears most urgent; and Electric Boat is competing with companies in its own supply chain, who also are desperate for trained workers. Over the next seven years, company leaders have said they need to hire 17,000 people — the same number hired over the last seven years.

The company is leaning on help from the state, working with the Governor’s Workforce Council as it plans that workforce expansion. At a recent council board meeting, Andrew Bond, human resources VP at Electric Boat, said in order to meet the company’s hiring goals, Connecticut educators should be seeking to catalyze student interest in things like welding programs as early as the third grade. 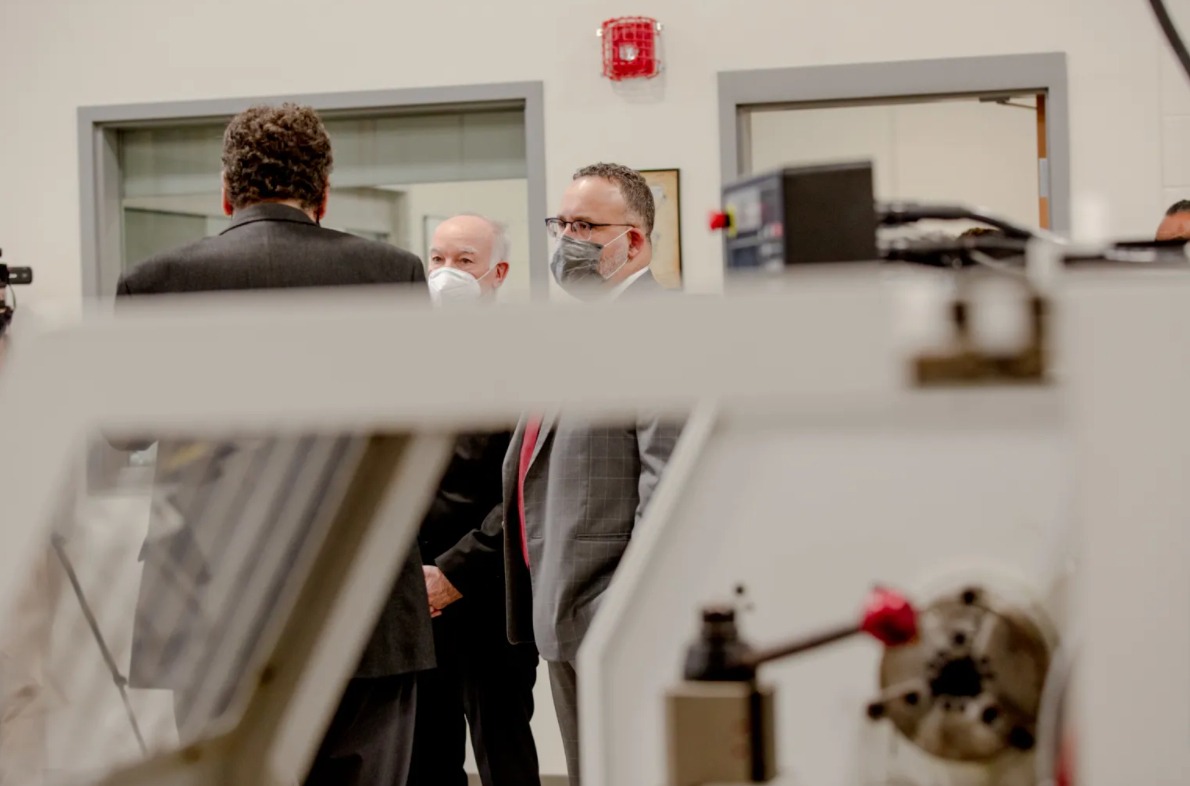 Secretary of Education Miguel Cardona listens to Mark Hill, CEO of Eastern Connecticut Workforce Investment Board, at the Three Rivers Manufacturing Apprenticeship Center. During the visit, Secretary Cardona spoke about his willingness to expand career and technical education across the nation. YEHYUN KIM / CTMIRROR.ORG

Young people entering the workforce may lack awareness about manufacturing, but that could work to the sector’s advantage if they come at it with fresh eyes, industry leaders say.

“Manufacturing isn’t what it was a generation ago,” Cooper said. “It’s lean, clean and green.”

It’s also far more technologically advanced — increasingly so in Connecticut. The state’s large aerospace and defense manufacturers require a high level of precision from the parts-makers in their supply chains. And the multimillion-dollar 3D printers, grinders and other computer-based machines require specialized training.

Cooper said young people are much more comfortable with all of it.

“We find that young engineers, they think in three dimensions. For several hundred years, manufacturing relied on two-dimensional blueprints, but now we’ve got smart models,” he said. “The younger generation, they just take to that.”

The onset of those new digital technologies has been referred to as the “Fourth Industrial Revolution,” involving internet-connected machines, robots, quantum computing and artificial intelligence. Last year, the Connecticut General Assembly established a working group tasked with making legislative proposals to help small- and mid-sized manufacturers shift over to the new regime. Led by the nonprofit Connecticut Center for Advanced Technology and consulting group CONNSTEP, the working group has been meeting with businesses for the past several months. An interim report is due in mid-March, and the group’s final strategic plan is slated for October.

Economic development leaders looking to recruit businesses to Connecticut say the state’s high-tech manufacturing operations and highly skilled industry workforce are key competitive advantages over other states. They’re also the reason manufacturing jobs here pay well above the average salary statewide, according to a recent analysis by the Connecticut Business and Industry Association. 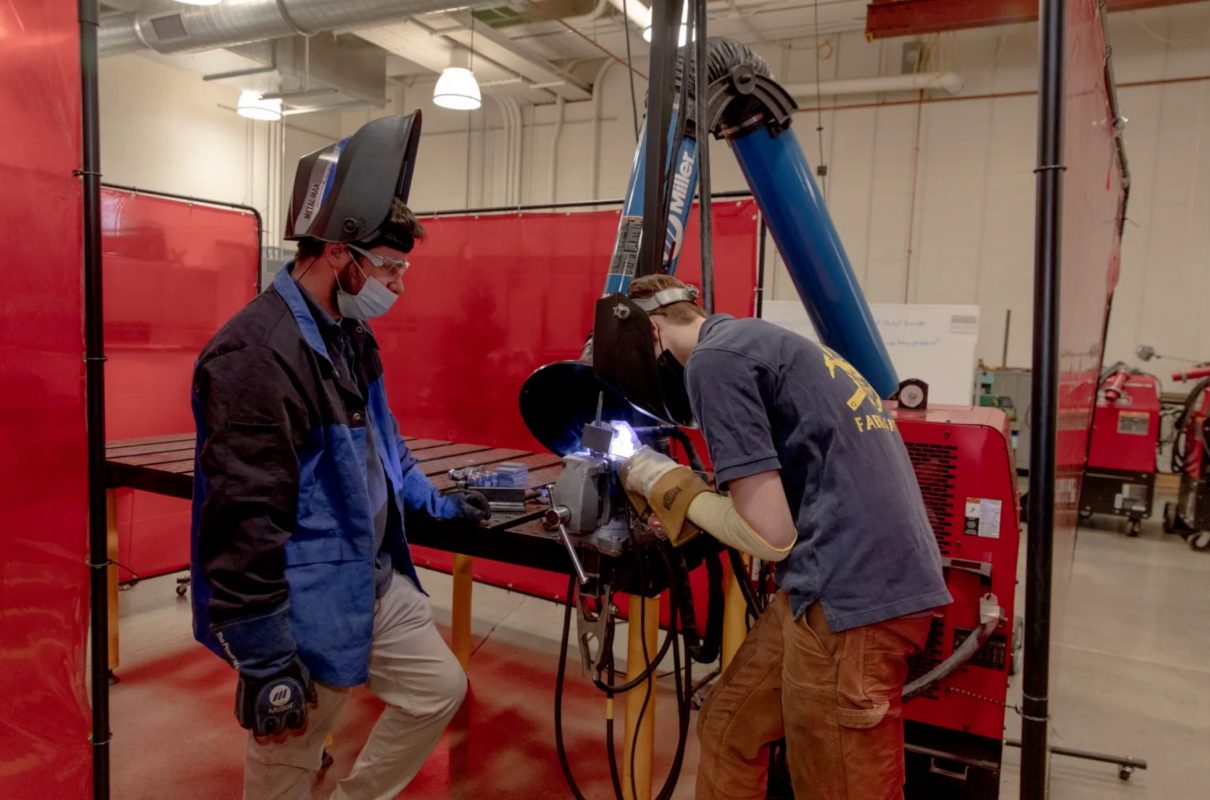 Comprehensive high schools have begun adding back technical education options. Tuition for advanced manufacturing training programs is either partially or fully subsidized, and many companies offer reimbursement for employees who go back to school for higher education degrees. To many young adults facing years of crippling student loan payments, the option to graduate debt-free with lots of lucrative job options could be enticing.

That’s one of the things that drew 19-year-old Quinn Hayes to the profession. Hayes didn’t know much at all about manufacturing when she signed up for a program at Derby High School’s new Advanced Manufacturing and Technology Center in 2019. Within three years, she had completed college-level training at Housatonic Community College — tuition-free — and at age 18 she started her first job at Horberg Industries in Bridgeport doing precision grinding.

Hayes said she’s proud of how far along she is at so young an age.

“It’s insane. The paycheck is like what someone who is 23 would be making.”

She also really likes the work. In the coming years, Hayes said, she’s excited to learn how to operate more of the machines and to potentially work her way up to a higher title. The only “kind of awkward” thing about the job, she said, is how young she is compared to everyone else. And she’s often the only woman on the factory floor.

“The whole manufacturing field is guy-based,” she said.

Bead Industries’ Mayer said she’s been there. When she first went to work for her family’s company in her mid-20s, she was the only person under 50.

“There was a joke about ‘stale, pale and male,’” she said. And when she joined the board of the manufacturers association, the dynamic was similar.

But in both cases, things are already changing. Mayer said there’s now a “young manufacturing professionals group,” which coordinates panels, plant tours, brewery visits and other events for the 40-and-under crowd. Women and men are now evenly represented on the organization’s board, and the average age among members has dropped from where it was just a few years ago, she said (over 50).